The purpose of this experiment is to produce tempeh which is a mold modified food and observation of the action of Rhizopus oligosporus  on the soybean when the production of tempeh.

Tempeh  is a traditional Indonesian food. This chunky, tender cake of soybeans is consumed daily in Indonesia, usually with rice as part of the main meal, or sometimes by itself as a snack. In Indonesia, tempeh-making is a household art that varies somewhat from home to home. Whole soybeans are usually mixed with a grain such as rice or millet. A “starter”-(Rhızopus olıgosporus) usually a piece of tempeh from a previous batch – is added to begin the fermentation process. In traditional home-based tempeh-making, the mixture is wrapped in banana leaves and left to ferment for 18 to 24 hours. In Western tempeh factories, commercial starters are used to produce tempeh, and the fermentation process takes place under carefully controlled conditions. Whatever process is used, the result is a cake of soybeans with a rich flavor sometimes described as smoky or nutty. The flavor also has been compared to that of mushrooms.Since tempeh is made from whole soybeans, it is a fiber-rich food. It is also a generous source of many nutrients such as calcium, B-vitamins and iron.

Production methods vary as with most traditional foods. In a typical process, soybeans are soaked in water, dehulled and then cooked in boiling water for one hour. After draining the soybeans are spread out for air-drying of the superficial moisture. Tempeh from the previous day is used as a starter. The prepared soybeans are thoroughly mixed with the starter, wrapped in banana leaves and left to ferment for one to two days. Mould growth is vigorous and the whole mass is soon covered and bound together by Rhizopus mycelium. Typically, tempeh contains 35% dry matter, half of which is protein. Unlike the previously discussed fermented soy products, tempeh does not contain salt.Tempeh is still, predominantly a home-made or cottage-industry product in Indonesia and Malaysia.

Tempeh is usually sold in natural food stores, where it is found in the frozen food case. Frozen tempeh keeps well for several months. Tempeh can be kept in the refrigerator for about 10 days. As with other aged or fermented products, like cheese, a little mold on the surface of tempeh is harmless. 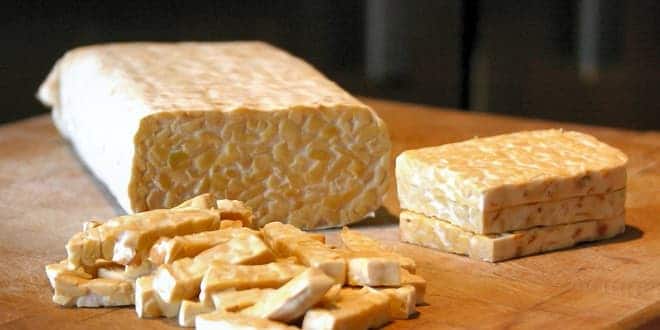